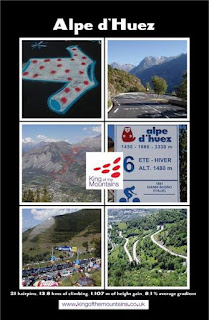 Winter conditions here in the village normally mean that from December to early April we are unable to get a vehicle down the snow-blocked street to our house. Owing to the lack of snow and sunny weather this year, access has been possible for a couple of months now. This makes life - and more to the point, deliveries - so much easier.

So, in answer to 'What's New?'; we have recently been able to get a brand new, comfy L-shaped sofa installed in the living room. Although most visitors favour sitting in the saddle whilst here, there is always the Tour to follow on TV, not to mention our huge collection of cycling DVDs (some new titles there too for the 2011 season - thanks to Kirt in San Fransisco largely!). We will be giving the sofa a good trial run on your behalf during April for the Tour of Flanders and the Paris Roubaix!

Other recent deliveries include lots of timber, metal and concrete to finally tidy up our garden. We have always been a bit ashamed of our 'lawn' - it is probably 20% grass and 80% rock! So, in the true spirit of 'Groundforce', we are about to take advantage of the snow-free conditions and commence with a decking project. This should give you a much more pleasant area to enjoy post-ride drinks, outdoor bike building/mainteance and generally soaking up the splashing stream and mountain views at the back of the house.

Also this year, by popular demand, we have produced some posters which include some lovely images of Alpe d'Huez (see picture). It doesn't look nearly as tough in 2D!

As mentioned in our blog post back in January, we have a new(to us!) minibus too. An upgrade with turbo and much needed air-conditioning for those balmy summer Alpine days.

Other developments in the village include the naming of the village streets, which has never officially been done before (it is hinted that our road will be called 'Rue des Jardins' - a bit more positive than the parallel street; 'Rue des Avalanches'!).

Only a week or so until spring officially starts and then the clocks change, we can't wait (even if it does mean losing an hour in bed)!

This winter has been kind to cyclists but a cruel one for skiers.

We have experienced very little snowfall in the area this year. This bodes well for the early opening/snow clearing of the roads to the higher cols in the Oisans (such as the Galibier, Croix de Fer and Glandon). We anticipate mid-May openings of most of these - as usual we will keep you posted on this blog as and when this happens. We still have some vacancies here for the late spring bank holiday (30th May) if you fancy blowing out the cobwebs and being some of the first riders to reach those high summits in 2011!

The 'peloton', normally seen on the valley roads in April, have been out in force pedalling since early February. The warm sun and snow free roads have meant that each week they seem to shed another layer of Lycra and are able to ride a little higher. Since the Alpe d'Huez road leads to a major ski resort it is always clear of snow. At present it is not only clear but lovely and warm once the midday sun has been on it for a while, consequently we have seen lots of riders climbing up amongst the weekend ski traffic.

Guy rode a lovely 75km loop with a couple of our neighbours last weekend. The circuit was behind the house here in the 'Trieves' area. Situated just that bit further south and lower in altitude, the weather was glorious, around 18'C. A bit of a 'last hurrah' for Yves (pictured right) as the following day he was booked in for an operation on his knee/cruciate ligament - that's the spirit!
Posted by King of the Mountains at 02:15 No comments: Links to this post
Newer Posts Older Posts Home
Subscribe to: Posts (Atom)
www.kingofthemountains.co.uk