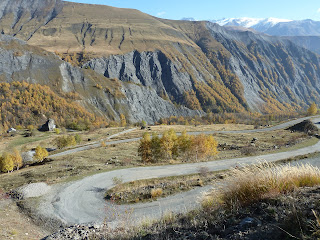 On Tuesday it was about +19'C and the autumn colours were magnificent, so I chose to ride where I could make the most of these conditions; I rode the Col de Sarenne.

If you've never heard of or ridden this col before, then you'll get a chance to see it in the Tour de France on 18th July 2013. The view on that day will be very different I'm sure. For a start, on Tuesday I didn't see another cyclist on the road and there were only 2 cars that came past me. In July I imagine that there will be a fair few fans and camper vans lining the hairpins, on Tuesday the only living things that I saw at the side of the road were a few grazing sheep and basking lizards. 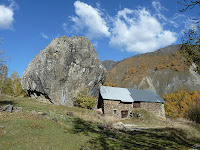 I rode the climb in the opposite direction to that which the Tour will take next year, this is a tough way to approach it (average 7.5%), but very rewarding for the views. In July it will be ridden as a descent from Alpe d'Huez 'sandwiched' between the second Alpe d'Huez ascent and stage finish. 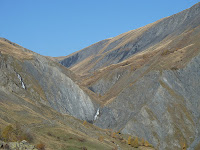 You may be able to see from the photographs that the road surface for a fair proportion is pretty rough with a good bit of gravel here and there. This roughness has come about during many winters when it's under a lot of snow that makes up part of the Alpe d'Huez ski runs. The col in winter has a reputaion too: the 'Sarenne' run lays claim to being the longest black run in Europe, 16km. Unlike the town and resort of Alpe d'Huez however, once you get to the Sarenne, there is not a hotel, ski lift or snack bar in sight. It's a really wild and desolate place with only a few houses scattered here and there (such as the house pictured here with the big rock nudged up next to it!).

Local cyclists are all hoping that the passage of the Tour will herald a new, smooth layer of Tarmac, though part of me thinks that this may lose it some of its' wild charm!

Helyn
Posted by King of the Mountains at 08:28 No comments: Links to this post

Triple bypass - for my bike!

As if by magic and with no training or effort, I feel fitter, younger and can ride up hills with more ease than ever before!

What's my secret? No, this is not yet another admission to doping. My secret is that I now have a triple chainset!

This is all thanks to Kevin, who some of you may have met here in September. As well as all the other help Kevin (and Brioni) were giving us, Kevin very kindly worked away on my grubby, neglected bike, fitting a whole new groupset (including a gold chain - more 'bling' than Mr T now!).

This was all done without my knowledge so I was bowled over when I got my bike out of the workshop for a quick spin a few days after the 'triple bypass' had been performed.

What a difference it has made. I have to ask myself why I didn't do it years ago!

Thank you Kevin from the bottom of my heart - and my legs!

Helyn
Posted by King of the Mountains at 14:34 No comments: Links to this post

The rumours are true! Stage 18 (18th July), Gap to Alpe d'Huez, includes the Col d'Ornon which will see the riders coming by our door. The last time the peloton came past the village was in 2002, just before we moved here, so we're really excited! Link to stage 18 information

So, those camping out on Alpe d'Huez that day will get two for the price of one, not such good news for the riders I imagine!