White-out in the village


We had a very early show of snow this year at the end of October, it soon melted, though the big cols; Galibier, Croix de Fer and Glandon shut and have not re-opened since. 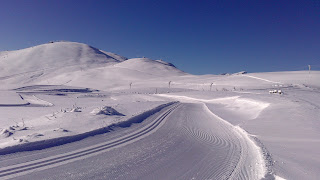 Winter has started in earnest now though; there was a big snowfall on Tuesday night/Wednesday. We get the feeling that this heralds the start of snow proper and the end of vehicular access in the village until April time. Keeps us fit lugging shopping bags down from the main road (and stops any heavy or impulse purchasing!), not to mention the snow shovelling!

We are well prepared this winter with a good stack of firewood and lots of firelighters (I'm no Ray Mears when it comes to fire lighting!).

So, with the cols closed, and the bikes in the shed, our efforts turn elsewhere. I have been doing a bit of running of late and have entered a running race in the snow that takes place on 8th December. Last year I was the last lady in the field with a handful of octogenarian blokes behind me! Hopefully this year I can make an improvement on that - I'll settle for second to last lady!

Guy is off to Alpe d'Huez tomorrow afternoon for his first cross country ski of this winter. He's pretty excited and is waxing the skis in the workshop as I type. It's going to be a cold one at that altitude tomorrow; -9 and down to -12 with wind-chill. Still, it will be sunny and that makes all the difference. Guy was E-mailed the above photo of a freshly groomed piste up there by a neighbour who he will be skiing with tomorrow - as if he needed a carrot on a stick! He has already been glued to the biathlon on the TV and I get the feeling winter and the return to cross country skiing could not have come sooner for him!
Posted by King of the Mountains at 13:32 No comments: Links to this post
Newer Posts Older Posts Home
Subscribe to: Posts (Atom)
www.kingofthemountains.co.uk