Today I took part in my first cross country ski race of the season.

A little under trained for the distance, I needed a helping hand which I took in the form of calories yesterday afternoon in Alpe d'Huez (see picture). A coffee cake and hot chocolate (whose 2 sole ingredients are creme fraiche and melted Swiss ch

ocolate). If you look very closely at the dark chocolate disk on the cake top, you can see a Marmotte image as used in the race. This particular Marmotte was a lot more short lived!

So, up at 4:45 this morning which was the first shock to my system, second shock was to find that it was -7'C outside. I then had a 2 hour drive towards Gap (heater blasting!) to a cross country ski centre, Champoleon, which is situated up a small but quite open valley. It was still pitch black when I arrived in an icy race car park at 7:30.

The format of the race (now in its second year) is unusual in that it is a straight line (of 42km) rather than a circuit. Also unusual is that most of the route covers ground that is not normally pisted for skiers. Given the logistics, coaches were provided to take us to the start point in another cross country ski area called Ancelle, for us to then ski back to our cars. As the sun came up around 7:45am, we got a tantalising view of the finish area that we would see some hours later (photo below). Coaches left the car park at 8:30am. A funny 'It's A Knockout' style running on an icy car park in ski shoes ensued at 8:29 when a large group of us realised we were waiting next to the wrong coach, a random one nothing to do with the race at all!

Once at the start area we had lost a few degrees of temperature and it was now down to -11'C. With a bit of time to kill before the off, this lead to some 200 skiers searching for somewhere warm to shelter. 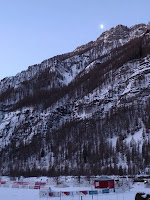 I soon found myself in a heated wooden hut (normally used as a indoor picnic area for visiting school parties), huddled and squished amongst the other competitors, not unlike penguins! Not since commuting on the tube have I been in that position.

The course was not particularly hilly which was very welcome. However, wherever there were rises, they normally gave way to stunning, far reaching views back towards the white mountains near Gap. There were road crossings where cheerful marshalls stopped traffic and shovelled snow over the tarmac for us to skate over, there were forested areas, areas with scary drop-offs and lovely flat sections that followed rivers with icicle-clad trees on the borders. All in all, a lovely route and unique to be able to ski there.

As you can tell from my observations, I had time to look about me. I don't tend to push myself too hard at these things, I aim just to finish without blowing up. Today I managed for the first time to find myself a pace that I could sustain and was very pleased not to have to stop at all (except for at feed stations of course!). That was until just after I had passed the '1km to go' sign. Whether it was psychological or whether I should really have eaten 2 of those coffee cakes yesterday, I suddenly felt empty and completely bonked.

I very slowly made my way up a gentle, wooded climb of about 400m in length and then realised to my horror that the final 600m of the course snaked around a field/finish area to give the spectators a good show of the finish/finishers. Hardly any excitement for them at this stage in the race yet they were very kindly all still watching and cheering encouragement. I was out there on the circuit pretty much alone save someones dog and just 9 other 'racers' behind me! Just as I wanted to lazily plod back, ashen faced and with a thousand yard stare, this 'arena' set up made me feel compelled to adopt the 'exhibition ski stroke' and put on a weak smile. By the time I crossed the line, some 3hrs 30mins had passed and I was utterly empty.

More 'It's A Knockout' in the icy car park trying not to cramp up whilst walking on ice in ski boots! I was so done in that I could not even muster the energy to walk 400m and stand in a queue to claim my post-race meal, I just got changed and drove home - OK, so I did have a stash of emergency Christmas cake as a back stop in the glove compartment!

Helyn
Posted by King of the Mountains at 13:41