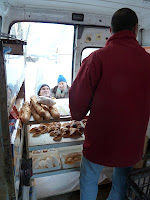 Sometimes, despite all the preparation in the world, things just don't go to plan. Sunday was one of those days. Sometimes though this is not always a bad thing...

I was due to take part in a cross country ski race close to Gap. A 10am start on a 30km course, fairly hilly and technical, one of my favourite events of the year.

Temperatures have plummeted here this last week so the night before Guy kindly waxed my skis for cold snow conditions, good thing too, when I left the house at 7am it was -19'C. I had prepared a bag full of post-race clothes; fleeces, hats, scarves, gloves, woolly socks, the works. I had a flask of tea and a packet of biscuits too, I'd even put a neoprene sleeve on the tube of my Camelback in the hope of stopping it turning into a solid lump.

Around 11km into my trip I arrived in Le Perier, a wide, bowl-like part of the valley, a trap for cold air and consequently a few degrees cooler than at home, -22'C in fact. The minibus ground to a halt as the diesel froze up. I was able to start it up again and get to the next village, Entraigues, where I was hoping that a small uphill section would be enough to warm the engine up. Unfortunately it was still too cold. The point at which the ghost was finally given up was pretty precarious - just after a blind bend in the road. I was however able to make progress in reverse gear so re-traced my steps for about 600m to a car park where I knew the sun would reach later in the day (the plan worked as we recovered the van after midday and thankfully the diesel had thawed!).

Next thing was to put on every stitch of clothing that I had with me; the things I already had on plus my post-race kit; 2 pairs of socks, 2 pairs of trousers, 2 thermal base layers, one fleece, one down jacket, 2 woolly hats, 2 scarves... after donning this lot I emerged from the van looking every bit like Michelin Man. The Camelback pouch of isotonic drink was ditched in favour of making space for the flask and biscuits. Time to hitch a lift home. Trouble with being a Sunday + early morning + rural area + freezing cold day = not much traffic.

Finally, salvation came in the shape of a white transit van and a very chirpy driver. To my surprise there was no seat for passengers but I was happy to sit in the back on the boarded floor. Even happier when I realised that I had just hitched a lift with a 'boulanger' on his delivery round to the local villages. The inside of the van had an amazing aroma of freshly cooked bread, which it was - the driver/baker had got up at 3am himself to make it all. My perch was only a few feet away from some delicious looking cakes and pastries, the wobble of the custard slices had me in a trance all the way up the valley, I was in cake heaven!

It really was one of the most sociable and pleasant mornings I've spent in years. At each village the driver would sound his klaxon (not quite 'The Dukes of Hazard' but close!) and from the depths of each little hamlet people bundled in warm clothes would emerge for their Sunday treats. I realised that it's not just in England where the weather can be the first, and sometimes only, topic of conversation on brief meetings. On Sunday every single customer greeted us with a number that corresponded to the lowest temperature that they had registered on the garden thermometer - one lady even had thermometer in hand as proof! -26'C was the record and I can believe it.

So, as I waved goodbye to the baker in his van just a short stroll from home, I did so with a real spring in my step and smile on my face. I had had a smashing morning and met some really lovely people who live in our valley and it was only 9:45am, the cross country ski race had not even started yet!

Mind you, come lunch time I did feel a bit stupid when I realised that we had no bread for our sandwiches!

Posted by King of the Mountains at 13:18