When winter comes to our corner of the Alps, we pick up our cross country skis in place of the bikes. Cross country skiing is by far one of the toughest sports I've tried and one of the most technical too. It's a good way to keep up cardio-vascular fitness during snowy months. 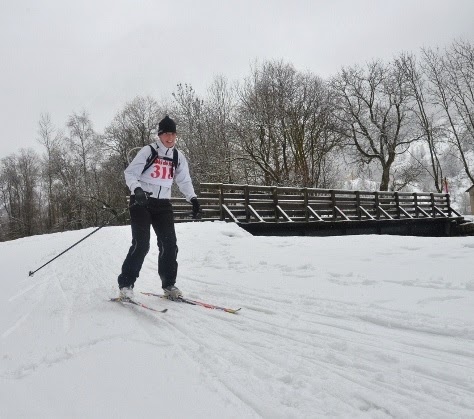 This year I have taken part in a few cross country ski races. The events share a very similar atmosphere to cyclosportives.

Races give the opportunity to ski at different resorts and sometimes in areas that are not normally on the cross country ski itinerary; fields, roads and countryside pisted and prepared just for events. At some, snow is shipped into small village streets so that you can ski amongst the houses and farmsteads, it's really quite unique.

My second race of the winter, back in February, was in a stunning spot not far from here,Valgaudemar, a small valley similar to La Berarde (for those of you who have ridden that in summer). It was a difficult day weather-wise with fresh snow on the circuit and snow falling for the first half of the race. This made the field pretty small, only 19 people, including myself, in the line-up for the 30km event.

In that race I had a 'first'; a first in that I was last! The 'lanterne rouge' to put in in cycling terms! There were so few participants that despite being the last skier to cross the finish line, I still picked up a prize for coming second in my age group!

Sunday saw me setting off for one of the last events on the 2014 calendar; the 'Etoile des Saisies'. Up at 04h30 to start a stunning drive into the Savoie where, like here, spring is on the way. As I neared the resort of Les Saisies at 1600 metres, I was up in the snow-line and the scene looked altogether more wintry.

The event had  a pretty big field with some serious racers at the front of the pack. The course had about 550 metres of climbing in each lap of 21km and wound through some beautiful tree-lined areas of the resort. On a clear day you get great views of Mont Blanc but the snow was too heavy to get even a glimpse on Sunday.

The first lady crossed the finish line having completed twice the distance that I had in half the time. I've got a long, long way to go to get to that sort of standard, but as they say, it's the taking part that counts!