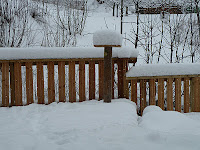 We have had loads of snow here over the last two days. No doubt about it now, it's going to be a white Christmas here at King of the Mountains. Here's a photo of our decking under a good few centimetres yesterday - there's now around a foot balanced on top of the fence and bird table.

This is great news for us as the local ski pistes on the Col d'Ornon are now open. We have already been up for a couple of cross country ski sessions and conditions are great (even if ours isn't). Out of curiosity I popped the Garmin into my back pocket today to see how long the black run was and how much height gain there is in a loop. 6km with 300 metres + height gain. I have to say it felt further and higher!

Incidentally, hanging from the bird table in the photo is one of those fat/seed balls for birds. One went missing yesterday morning and shortly after this picture was taken, this one did too. I thought the blue tits had an appetite on them until I noticed our next door neighbours dog sneaking out of the garden, licking her lips sheepishly. Apparently she has quite a taste for these, it's not her first time. I imagine she had a bit of a stomach ache last night!

Helyn
Posted by King of the Mountains at 06:39